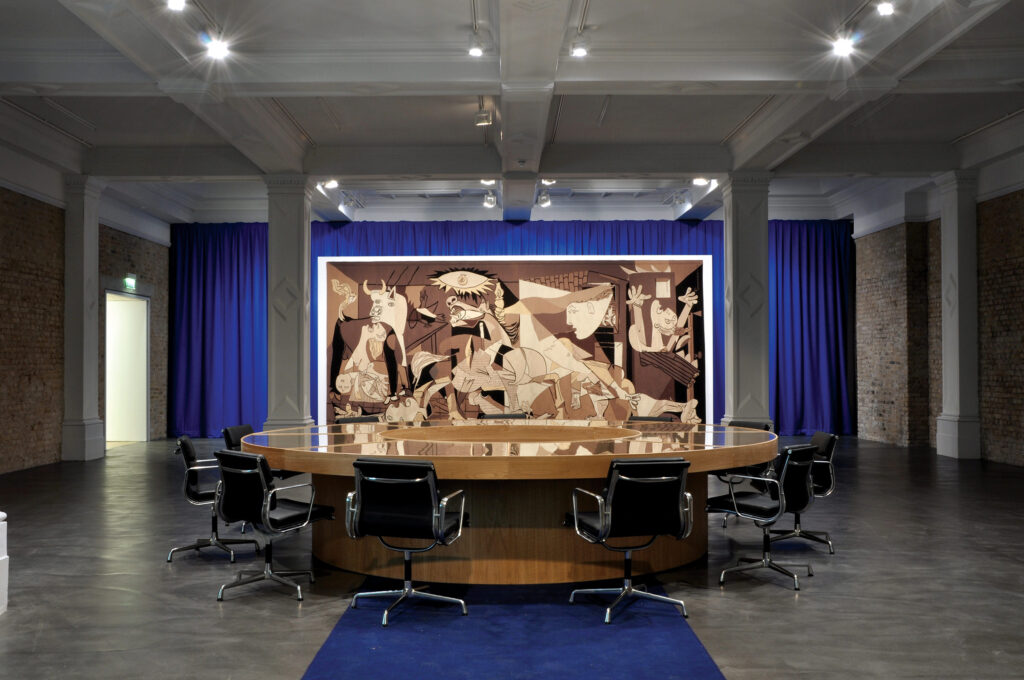 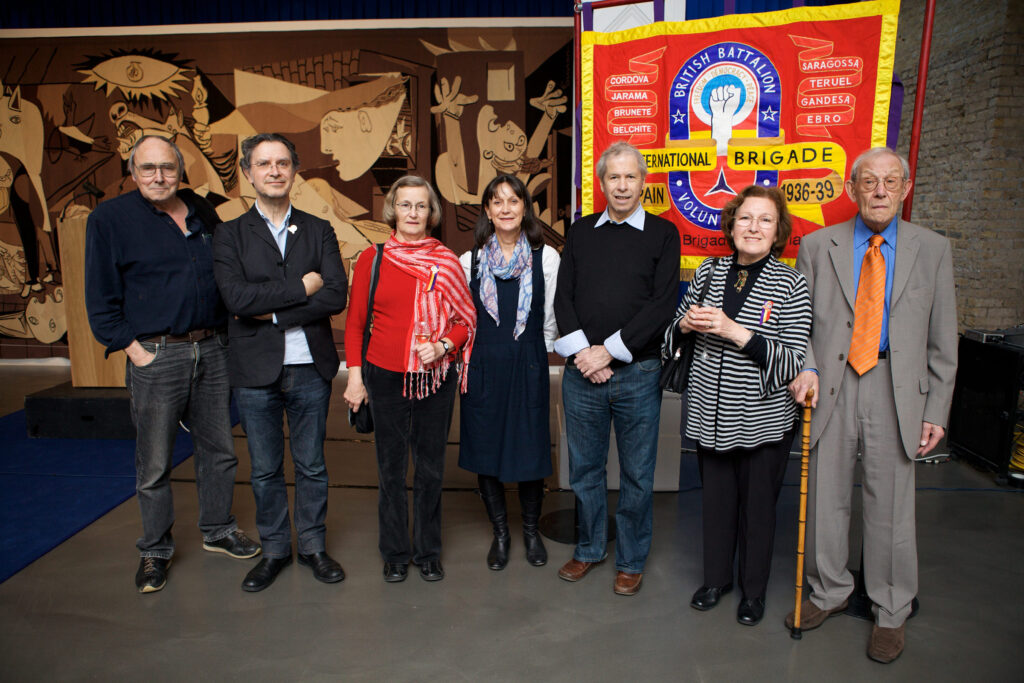 Documentation of a meeting with members of the International Brigade held during the course of Goshka Macuga’s yearlong installation, The Nature of the Beast, 2009–2010, courtesy Whitechapel Gallery

The Nature of the Beast

Goshka Macuga first introduced tapestry into her installations as part of the exhibition The Nature of the Beast at Whitechapel Gallery in London in 2009, only there the tapestry was not made by her but by Pablo Picasso. Macuga borrowed a woven version of Picasso’s Guernica (1937) that is normally on display in the United Nations headquarters in New York. This gesture commemorated that the original painting was shown at Whitechapel Gallery for three weeks in 1939. Yet it also served as a commentary on a controversial incident when the tapestry was covered during an address to the UN by the then US Secretary of State Colin Powell in the run-up to the invasion of Iraq, presumably because of its graphic anti-war message.

Consequently, the elements of Macuga’s installation at Whitechapel were the Picasso tapestry, a Cubist portrait bust of Powell, and a circular archive table with documents pertaining to the 1939 exhibition of Guernica, the impact it had on audiences in London, and the way it was used to generate support for the Republican cause in the Spanish Civil War. This table had a double function. It also provided a meeting space to the public throughout the exhibition. Macuga hoped to mirror the activities that had taken place in 1939 and to animate her project, which lasted for a whole year.

Handing over control of the programming to the institution and the general public, she found that her invitation was taken up in ways that contradicted Picasso’s original intentions: in particular a meeting of “high net worth individuals,” some with links to the arms trade, and a speech by Prince William. At these events the pacifist and republican symbolism of Picasso’s Guernica appear to have been overlooked. 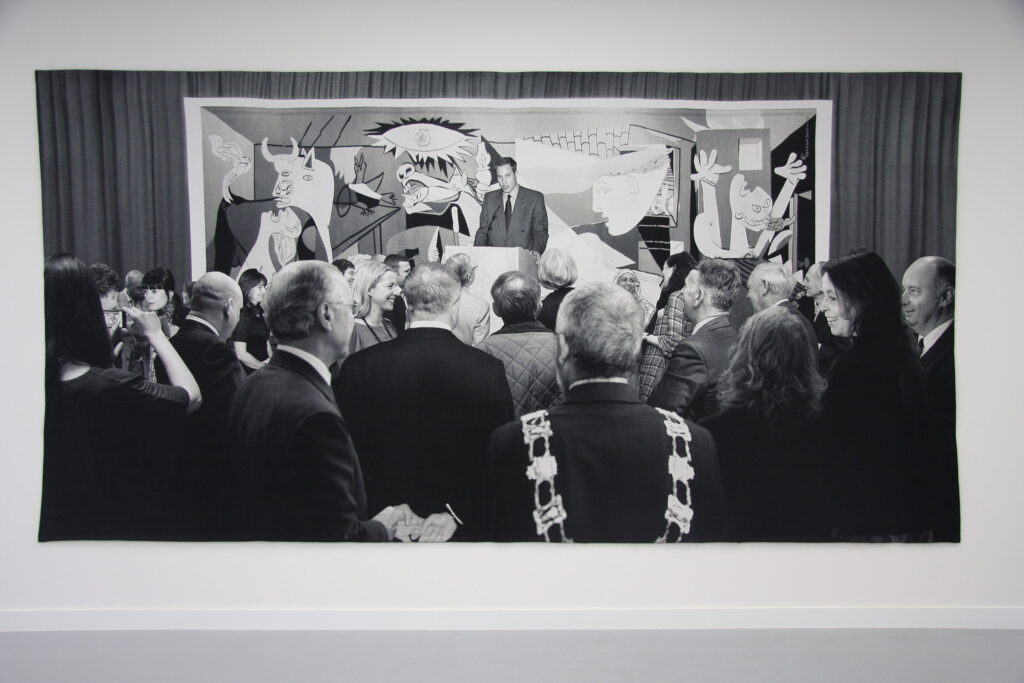 In response Macuga produced a tapestry of her own, titled On the Nature of the Beast (2009). It was based on press photographs taken during the Whitechapel show and its associated events. These were edited and collaged into an image that was then translated into a tapestry woven on a Jacquard loom. The work depicts the prince giving a speech in front of the Guernica tapestry, cheered on by an appreciative crowd including the gallery’s director, corporate funders, prominent individuals in the London art world, and the artist herself.

Goshka Macuga, Of what is, that it is; of what is not, that is not 1, 2012, wool tapestry, courtesy Goshka Macuga 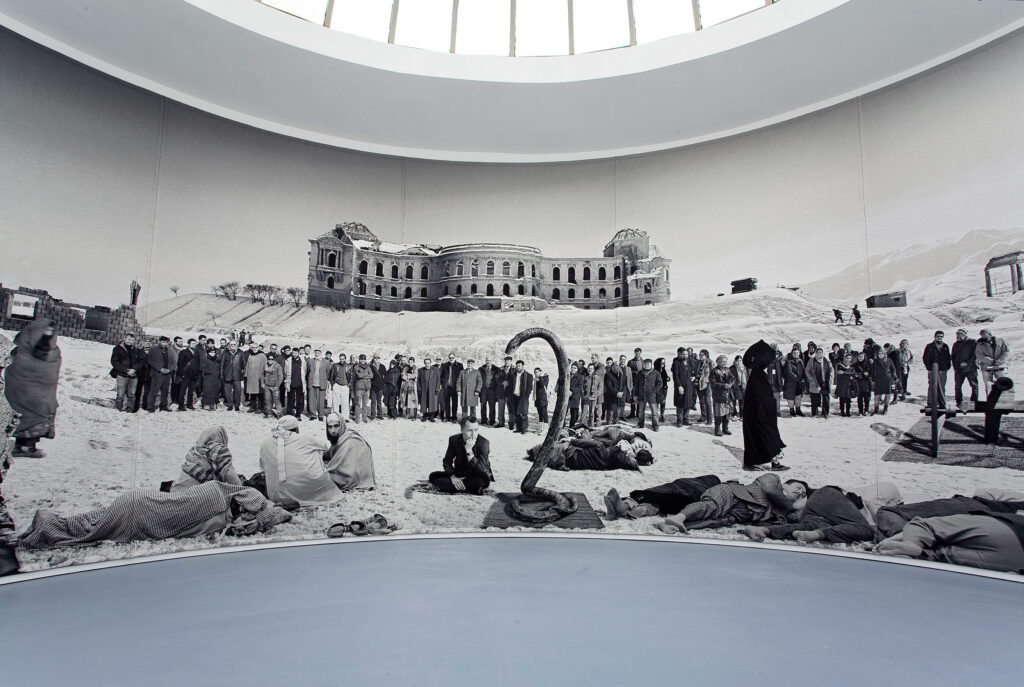 Goshka Macuga, Of what is, that it is; of what is not, that is not 1, 2012, wool tapestry, installation view dOCUMENTA (13), Kassel, courtesy Goshka Macuga. Photo: Roman Marz

A set of two tapestries shown in this exhibition, titled Of what is, that it is; of what is not, that it is not 1 & 2, were made for documenta 13 in 2012. For this edition of documenta several satellite locations were designated beyond Kassel in Germany, where the main exhibition takes place. The most significant of these other locations was Kabul, the capital of Afghanistan, where the curatorial team as well as participating artists and academics undertook research and an exhibition was organized. Subsequently, several artists in this documenta made work reflecting on their experience of Afghanistan under occupation by US, NATO, and other troops.

Macuga chose to create a tapestry that would straddle both locations, Kassel and Kabul, with one of its two parts being shown in each city. This separation meant that the work would not be seen in its complete form, which perhaps is a metaphor for the impossibility of bridging the gap between these two disparate locations. Both tapestries depict groups of people, in Kabul and Kassel, brought together under the aegis of documenta.

In Kabul, Macuga organized a seminar that drew a crowd of 100 cultural and diplomatic figures from the city, including Afghani artists and intellectuals, foreign artists, embassy staff, journalists, representatives of NGOs, and members of the documenta team. This group was photographed, and in the tapestry it appears in front of the ruins of Kabul’s Darul Aman Palace (the Abode of Peace), built in the 1920s in the European style.

The Kassel tapestry is made predominantly from photographs taken during the award ceremony in Kassel for the Arnold Bode Prize, which was awarded to Macuga. It features a group of people that includes the Artistic Director of documenta 13, Carolyn Christov Bakargiev and her curatorial team, prominent figures from the art world, and a smattering of Occupy protesters with banners. They all stand on the lawn in front of the ornate façade of the early eighteenth-century Orangerie building.

Beyond the neat way in which the work joins the two locations through a mirroring, Macuga used this opportunity to question the curatorial decision of linking documenta in Kassel to the city of Kabul. The central motif of both tapestries—a large group of people standing in front of an imposing architectural structure in a quasi-official capacity—seems to represent the institution of documenta itself. From its inception in the mid-1950s, documenta has aimed to encapsulate the art of its moment. In this sense the gatherings in the two tapestries can be seen as the coming together of people who are in one way or another significant in the art world, although complicated by a chorus of additional figures such as protesters, street sleepers, and ghosts from the past. The formal arrangement of all these figures against the architectural backdrop, which is replicated from one tapestry to the other, seems to suggest that the intellectual, curatorial, and administrative framework of documenta has been exported to Kabul without being modified in the transfer.

Macuga comments on this in the accompanying text. She stresses the fact that the satellite exhibition took place in the context of an occupation and a war economy. It was reliant on military infrastructure and happened only through diplomatic channels, which put it at risk of being connoted as the soft power that accompanies a military intervention. The exhibition was one of many other forms of western cultural investment in Afghanistan at the time. 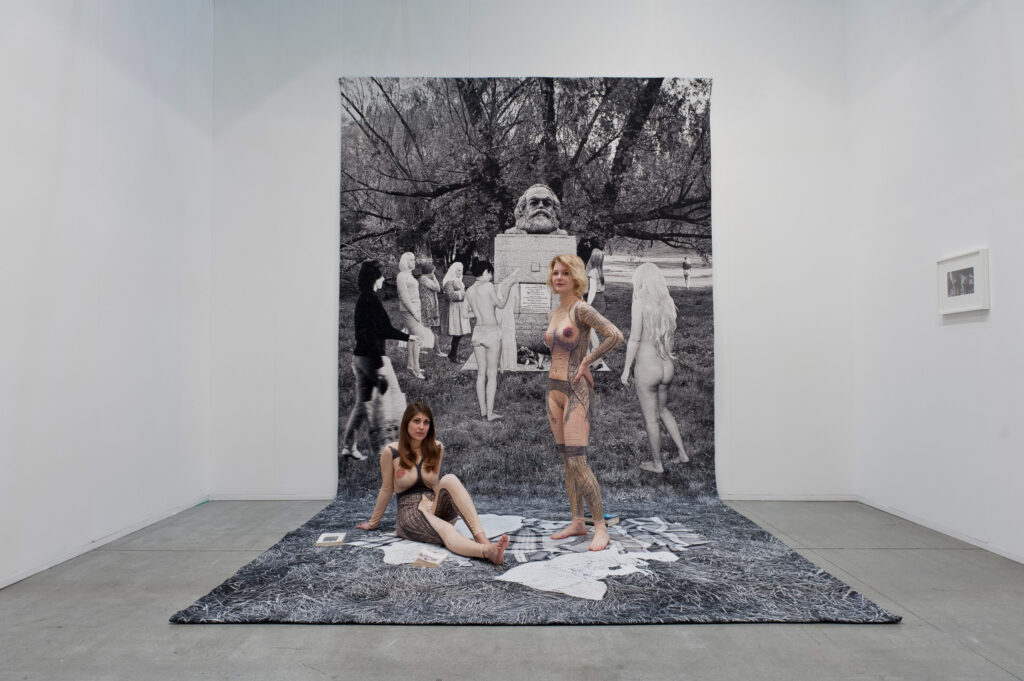 Death of Marxism, Women of All Lands Unite

A more recent tapestry is Death of Marxism, Women of All Lands Unite (2013). It differs from the other works mentioned in that it is smaller, not concerned with a particular institution (unless we count the institution of Marxism itself), and extends from the wall onto the floor and integrates a performance element.

For this tapestry Macuga incorporated photographs by the Czech artist Miroslav Tichý (1926–2011), famous for using handmade cardboard cameras to take pictures of women who were usually unaware of being photographed. In Macuga’s photographic collage Karl Marx’s tomb in London’s Highgate Cemetery, with its inscription “Workers of All Lands Unite,” and an imposing head of Marx himself are transported to the scene of a bucolic picnic by a river. Women, some naked or half-naked, gather around the tomb as if in homage.

The strange juxtaposition suggests a scenario in which the man who created historical materialism—and also happened to be a dominant force in Czech society for much of Tichý’s lifetime—comes to inhabit a landscape marked by Tichý’s obsessive desires but at the same time reconfigured by Macuga as an offbeat feminist utopia.